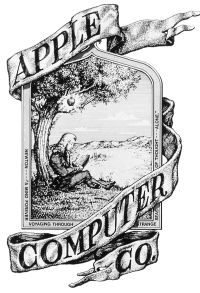 Most valuable
microcomputer
The Apple-1 Registry

2010 till early 2018 managed by Mike Willegal, afterwards by Achim Baqué.

List of all -year-old Apple-1 computer in a virtual museum. Mobile-friendly and responsive website.
It took well over a thousand man-hours to gather all the information and pictures, contact the owners of the Apple-1, visit/meet some in person etc. The maintenance of the website and database is extremely complex.
We appreciate your help: Please spread the word about the Apple-1 Registry by adding a link to your social media account and/or website. Contact us, if you have new information about any Apple-1 or Apple-1 (parts) for sale.

The Apple-1 Registry is a list of all known Apple-1 computer. The purpose of the Apple-1 Registry is to preserve information, history, whereabouts and condition of the few remaining Apple-1 computer for future generations. Independent, free to use, not influenced by the interests of any individual, company or organization and without any rating system. On a non-profit base. Any Apple-1 computer is an important piece of history. Only 200 and a few in a pre-production boards of the Apple-1 were made.
As a nice side effect, the Apple-1 Registry add a lot of authenticity, provenance and security to any Apple-1. Any published picture could increase the safety of any Apple-1. It would make it much harder or almost impossible to sell a stolen and listed Apple-1. Anyone would notice, which one it is. Because of many inquiries about the value of an Apple-1, you can read the short evaluation.
This website does not use cookies, does not track you, there are no advertisements and it is hosted in the European Union.


About the Apple-1 Registry 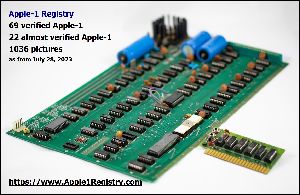 Jump directly to the list of all Apple-1.
The Apple-1 Registry was established over years ago.
Mike Willegal had the idea to createdthe Apple-1 Registry in 2010. The credit for starting the registry belongs to him. This list is an institution on the internet. Owners, enthusiasts, Apple-fans, auction houses and the press always refer to this list. Apple-1 computers are an important and rare piece of history.

The Apple-1 is now . Steve Wozniak is . Steve Jobs would be .

Many people interested in Apple-1 computers want more information and especially details about the history of each Apple 1 computer. It mostly depends on the Apple-1 owner if more information and pictures are provided. I like to work with anyone who has information. Someday the list will be handed-over to the next enthusiast. In 2018 Mike handed over the Apple-1 Registry to Achim Harald Baqué. I expressly thank him for this opportunity. You can see his announcement. I am the owner of some Apple-1 computer. All information until early 2018 was taken from Mike Willegal's website with his permission. He started the Apple-1 Registry on May 21, 2010.

Since the relaunch of the Apple-1 Registry in March 2018 many new informations, revisions, pictures and new discovered Apple-1 were added.
This Apple-1 Registry is designed to help maintain the provenance and history of known Apple-1 computer boards. And it is about the legacy of Steve Wozniak who invented the Apple-1. Intentionally this public registry does not contain enough information to determine the authenticity of a board since this could also assist counterfeiters in trying to pass off a replica as the real thing. All information must be weighed up against whether it serves the general interest or whether counterfeiters get access to information.

Despite all care taken, no guarantee can be given for any information. The information is compiled to the best of our knowledge and belief. Errors and mistakes expected. All additional information about Apple-1 computers is welcome. Owners are invited to contribute information, pictures and videos. Anything can be treated confidentially. The order in the Apple-1 Registry list is not the order in which Apple-1 Computer are built. In the past, every Apple-1 was added to the list sorted by version and components. The number in the Apple-1 Registry will not change anymore to make it a unique reference. Any other Apple-1 will be added at the end of the list. The website is run privately. Everyone can use the information from this website by adding credit (for example “information from Apple-1 Registry www.Apple1Registry.com”). To use any pictures or footage you need (as always) permission of the right holder. It is not allowed to copy, build or update another list that include information taken from this list.

No rating system will be used to rank the condition of the Apple-1 in this registry. Every Apple-1 is unique and it would be unfair to rank them in this registry. For some people any modification done by the first owner is part of the history and worth keeping, for others it is reducing the value. Keep in mind, any Apple-1 is worth as much as someone is willing to pay for. There is no rule.

The first Apple computer was foremost a hobbyist computer. Many were modified by their owners, back when they were new to perform tasks which required cutting circuit traces, soldering new components and general hardware hacking. There are many opinions on restoring an Apple-1 board to the most original condition when it left Steve Job’s parent’s home in 1976/1977, for some boards these modifications make that impossible. As with any antique, unmodified is most desired unless the provenance of modifications makes the artifact more interesting. For example, Dr. Wendell Sander’s Apple-1 was modified to 20k of RAM. Dr. Sander was a very early Apple employee and used the Apple-1 to develop Star Trek which would eventually be one of the first games Apple made available for the Apple II.
Also, museum curators might have a different way to look at modifications than a collector.

Additionally, Apple was a very small company in the beginning, and beyond the first 50 boards delivered to the Byte Shop, which were assembled in the same 30 day window, many Apple-1 were assembled as needed in small batches and might have slight variations in the components. Some came with a plastic AMI 6820, a few came with a ceramic 6820 and some NTI units came with a plastic 6520 PIA. Some of these components have gone missing over the years and may have been replaced with more common, but date correct parts. While it might sound that it would be hard to determine if a component was original, this is not the case for an expert. There are some commonalities to small groups of Apple-1 which can be used to determine the date when it was assembled, and which of those components may have been changed. This information will not be shared on the registry to protect from counterfeit.

There are also many Apple-1 boards which were traded into Apple for newer machines, and were kept as souvenirs by Apple employees. Many of these were missing chips or components which the original owners removed before sending their computer to Apple. There were also 25 NTI boards which were never populated or sold. A few of these survived though some never were functional and contained defects. One such board is currently owned by Steve “Woz” Wozniak. This board had a solder whisker which shorted out an address line which was corrected during a recent restoration.

It should also be kept in mind, running conditions and originality are interesting with the Apple-1. As with any vintage computer from the 1970’s, they are simple enough and use off the shelf integrated circuits which are easily replaced if originality is not desired. Additionally the capacitors, power supply components and memory chips are still manufactured and available to this day. Cut circuit traces, fire damage from exploding capacitors and even bad sockets can be corrected to work “electronically” but with evidence of the workaround or rework. There are some boards, which may sound as in bad condition, but this does not mean a board could not be brought to operational condition. It could mean the amount of replacement parts and rework may not be desirable. Is it better to have a working Apple-1 where only the physical fiberglass board is original, or one where 90% of everything original but not running? This is a question for each collector to answer themselves.

Documentation is always very interesting. While some Apple-1, which may have been purchased 2nd hand in the late 70’s with “photocopy” documentation, some still include original bound documentation and schematics with handwritten corrections by Steve Jobs or Daniel Kottke. Documentation can also be found separately as dealers were sometimes sent copies of the documentation to help sell the computer. The same is true of the Apple Cassette Adapter.

Finally, a word on accessories and documentation: While patience and a large bank account can lead someone to find “matching” 1976 accessories for their Apple-1, some boards are still paired to the original monitor, keyboard, transformers the first owner bought. Some Apple-1 even include the original cases built by their owners or purchased from the Byte Shop. Remember, Apple only sold the mainboard, Cassette Interface Adapter and documentation. Nothing else.

Thank you to the many people who helped the registry with information, pictures, stories and above all, more facts. Mike Willegal deserves the biggest thanks. He collected information for years and at a time when very little was known about the existing Apple-1.
Here are just a few contacts we have/had with famous and/or well-known people who have something to do with Apple or components used for the Apple-1:
Steve Wozniak, Ron Wayne, Daniel Kottke, Bill Fernandez, Chris Espinosa, Randy Wigginton, Wendell Sander, Paul Terrell, Chuck Peddle, Bill Mensch, Liza Loop and many more.

Thank you to Corey Cohen. Thank you to all Apple-1 owners and curators of museums who shared information, pictures and passion.

How to sell an Apple-1

How to buy an Apple-1