The first prototype of the Apple-1 was hand wired by Steve Wozniak. Steve used point to point soldered wiring rather than wire wrap because it was easier to follow the wiring once built up. The prototype is shown in an early video by Steve Wozniak himself (Video section of this page). In an interview Woz talked about the upper board you can see in pictures. There are 4 white 2 KB EPROMs and that's how he developed BASIC and other routines of the Apple-1. Unfortunately, the prototype could be lost. Woz can't remember where it is and maybe it was destroyed in a fire in Woz' garage. But this could be just a myth.
In early 2022, evidence emerged that at least the handwired prototype still exists. All efforts to obtain current pictures or even to examine the prototype on site have failed so far.

Press release from March 29, 2022. Paul Terrell (founder of the Byte Shop) gave Achim Baqué (curator of the Apple-1 Registry, a list of all Apple-1 computer) some information recently. Thanks to Paul’s support and his Polaroids of an early Apple-1 it was a great surprise to zoom into the pictures from 1976. The photos were taken when Steve Wozniak and Steve Jobs first showed the Apple-1 to Paul at the Byte Shop. The Polaroids were already published in low resolution, but some characteristics were not noticed so far.

It was not easy to get even a tiny bit of information about the production prototype. Achim Baqué asked Woz, Wendel Sander, Bill Fernandez, Chris Espinosa, Daniel Kottke and Paul Terrell about the production prototype and got answers from all of them. It was not possible to clarify all open questions. Howard Cantin, the designer of the Apple-1 mainboard, may have some answers. Unfortunately, it was not possible to get in touch with him.

Confirming various assumptions took some time and a lot of research was needed. No one remember the prototype. We have only some pictures.

Achim Baqué will continue to search for information about the prototypes. Well, last years he collected all information but not much is known. Steve Wozniak mentioned a fire in his garage and maybe the prototype(s) were in this garage. This would have been a terrible loss. There is a chance, that the very first prototype still exists. Achim Baqué has some clues as to the whereabouts, but nothing certain.

In every story about the first Apple computer, Woz bought the 6502 and built around it the Apple-1. Not the 6501 CPU. At least for the production prototype it was the MOS 6501 CPU. 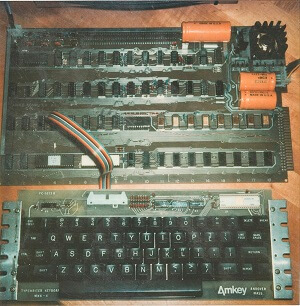 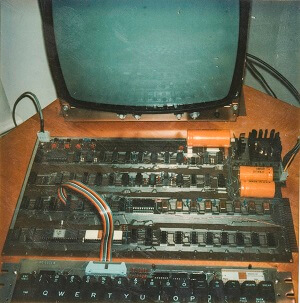 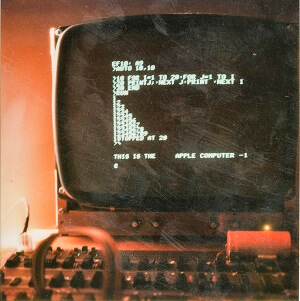 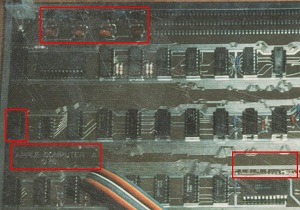 Here are listed two more Apple-1. Both are shown in Apple-1 ads and handouts. They do not look particular like prototypes but for #3 some chips are different. 2513 is a ceramic version, PIA is a zebra-ceramic and the DRAM is Mostek MK4096P-11 (ceramic) instead of MK4096N-11 (plastic).
And the little capacitors are the same used for NTI boards (2nd Batch) except some. There is no NTI logo. Maybe it was a pre-production NTI board?

If you want to read more about the engineering of the Apple-1 you can find many books about it. 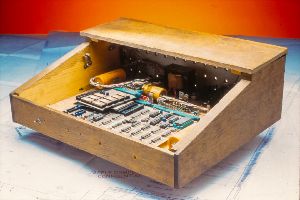 #1 '1st Prototype' Details
unknown
Hand wired, no serial number on the back
might no longer exist
1 picture, 1 video
with history
no auction 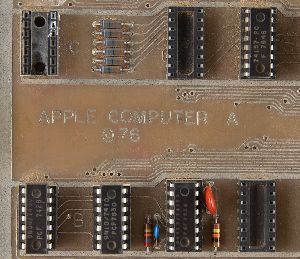 #2 'Production prototype Computer A' Details
USA
Pre-production, no serial number on the back
verified, not working
25 pictures
with history
August 2022 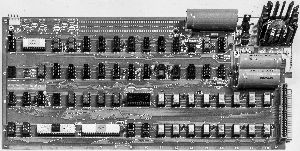 = location, = batch, numbers/stamps/labels, = verification status, = picture and video count, = available history, = auctions.
Accuracy: No guarantee can be given for the accuracy of any information. If you have more information please feel free to contact me. Many very good replica of Apple-1 exist. Even with date code correct components. Anyone interested in buying Apple-1 have to keep this in mind. Hobbyist usually building replica for private use. Even some museums use replicas.
Last update: Dec 16, 2022. Change log for all Apple-1.
Technical info: For much better performance all pictures are significantly reduced in size through admin by using efficient compressing tools for pictures shown on the web.


You can link to the Apple-1 Registry. Any form of reprint or reproduction (including excerpts) only with written permission of the Apple-1 Registry. Here you find press releases and images free to use under CC BY-SA 4.0.
If you have pictures and/or informations about any Apple-1, it would be very kind to share it with us.